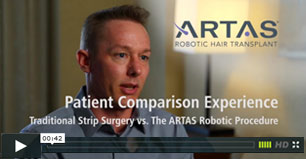 Female pattern alopecia (FPA) is an inherited condition affecting approximately 50% of women, having the same incidence as male pattern alopecia does in men. However, whereas men may lose the majority of hair on their head, depending on inheritance patterns, women don’t generally go completely bald. Rather, women will thin, sometimes appreciably, most often starting after menopause. And, whereby we know that male pattern alopecia is caused by genetic susceptibility to a hormone called Dihydrotestosterone (DHT), in women it’s not so clear cut.

It is believed that women with FPA have follicles that are more sensitive to circulating male hormones called Androgens. And that once Estrogen levels start to drop after menopause, the relative effects of Androgens begins to affect the follicles. Once again it’s worth repeating that this effect is genetically determined and can be inherited from either parent’s bloodline. FPA often is psychologically a very difficult problem for women. Unlike in men where hair loss is an acceptable outcome, for women whose self-image is tied closely to their hair, thinning, even mild thinning can create great anxiety and loss of self-confidence.

Fortunately, we have treatments that can help to reverse and control the progression of FPA. FPA can progress at different rates in different people but inevitably it does progress. Therefore treatment is aimed both at stopping progression and at improving the quality of hair that remains. FPA and MPA are both a process of progressive miniaturization of the follicles. Once a follicle miniaturizes past a certain point it may not be retrievable. For this reason, the earlier treatment is started, the better. In some women, we may prescribe a medicine called Spironolactone. This drug is actually a diuretic which has the additional benefit of helping hair to grow by blocking Androgens at the hair follicle. This medicine is safe with minimal side effects and no significant drug interactions. We use it in combination with other therapy.

Rogaine or Minoxidil is a topical medication which works by improving the blood supply to follicles and by increasing estrogen levels in the scalp. We often add other follicle stimulants to our own special topical formula to boost the effects of Rogaine. Platelet-rich plasma (PRP) is a relatively new treatment which involves injecting the patient’s own platelets into the scalp. Platelets are blood cells which are very active in wound healing. They stimulate other cells, including hair follicles. We have had great success with PRP having about an 85% positive response rate. Women do very well with PRP, especially in the early stages of hair loss. I would refer the reader to my previous blog focused on PRP.

Laser caps are also a very helpful, totally non-invasive way to maintain and improve hair. The biologic effect of laser light is not well understood, however, it is believed to have a similar effect as PRP. It’s like getting a little bit of PRP every day. All of the above treatments work to stimulate follicles to prolong their growth phase so as to produce stronger hair. We use these treatments by themselves or in combination with hair transplantation. Contrary to popular beliefs, women are excellent candidates for transplantation and do very well with that procedure. We most often use transplantation in women with a frontal pattern of thinning to restore hair in the hairline, the front half of the scalp and temples. The result is very natural because in most cases we are simply adding density to a background of thin hair.

In summary, a multidisciplinary approach is used to successfully treat FPA. There is hope for women with this psychologically difficult disorder. Consultation with a physician who specializes in hair loss may help bring peace of mind and a sense of hope to women suffering from FPA.

Cross Medical Group and Griffin Hair Restoration phone lines are currently offline. To reach us please email info@crossmedicalgroup.com and we will respond as soon as possible. Non-urgent messages will receive a response during regular business hours. We appreciate your understanding and apologize for any inconvenience.